To start off, I went with my husband back in 2013 and I CANNOT for the life of me find our pictures!! To be fair though, we were not allowed to take any photos inside the mansion, only outside, so they would be fairly generic photos anyway. So you can get a visual of what I’m describing however, I’ll use photos from http://www.atlasobscura.com, since they actually have photos of the inside!

The Winchester Mystery House was built in 1886 by Sarah Winchester, the heir to the Winchester Rifle fortune made by her husband, William Winchester. It started out as an 8 bedroom farmhouse, but once she began to be haunted by the spirits of all those who had been killed by her husband’s rifles, she transformed the farmhouse into $5.5 million renovation project that took almost 36 years, only stopping in 1922 on the day of her death. The labyrinth style mansion house is filled with 160 rooms, 40 bedrooms, stairways to nowhere, 15 foot drops into the kitchen, doors that open up to the outside, a seance room, and secret spying corridors that the paranoid Sarah could use to spy on her help. Most of this was built as a way to confuse the spirits that were after her, going through great lengths to even stay in a different room every night and take secret passages to get from one side of her house to another. She even had special doors built for her that were only a few feet off the ground, as she was an unusually short lady. In 1906, the San Francisco earthquake destroyed much of her home, which she took as a sign from the spirits that she was getting too close to completion, and ordered for that half of the house to be boarded up and to start adding to another section. The destroyed parts are still in the same state today, although structural renovations have been done. 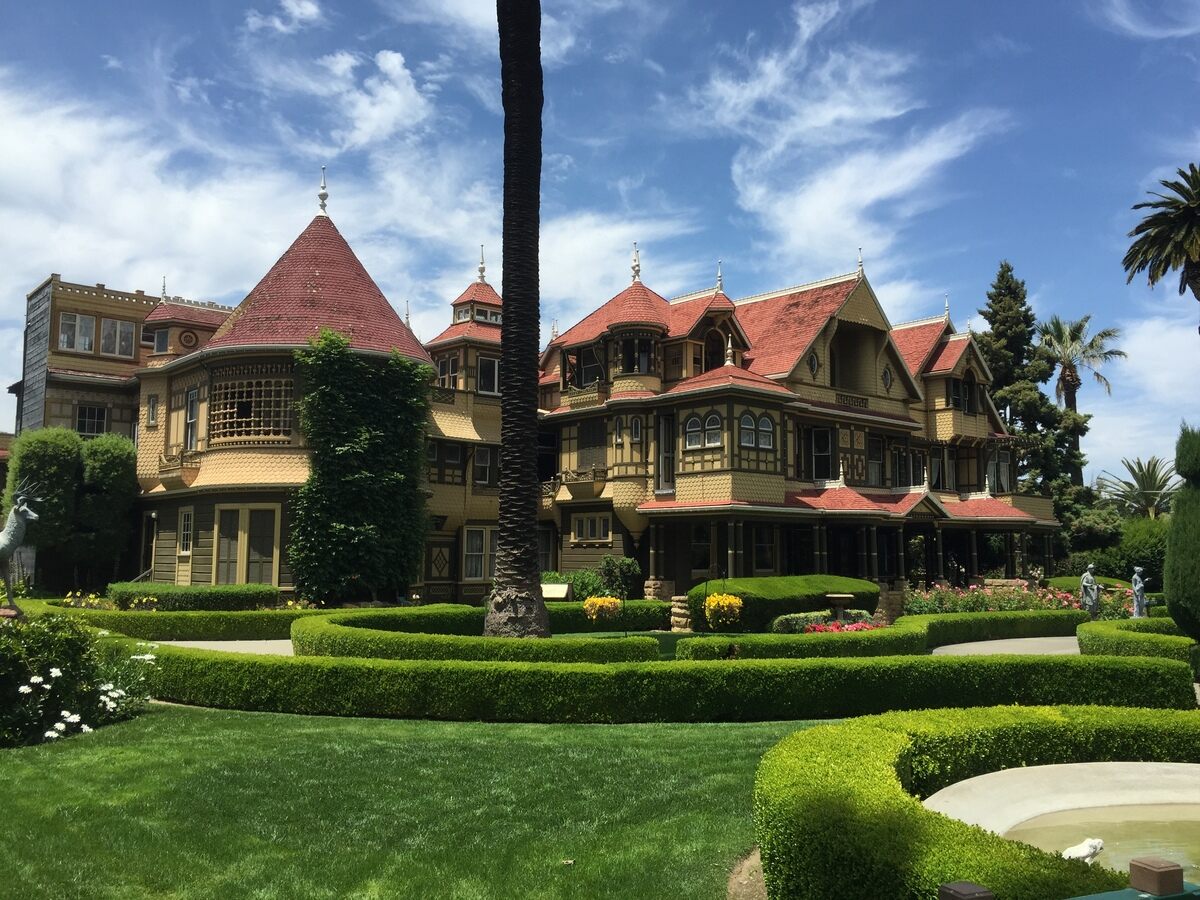 When we pulled up to the mansion, it was beautiful, however not quite as big as we would have thought from the front view. The vastness to the house was behind it however, hidden behind a beautiful yellow Victorian style facade, which in front of it laid a gorgeous garden. To the right of the entrance was the gift shop where the tours formed. We hopped straight onto the first tour of the morning and we were off. 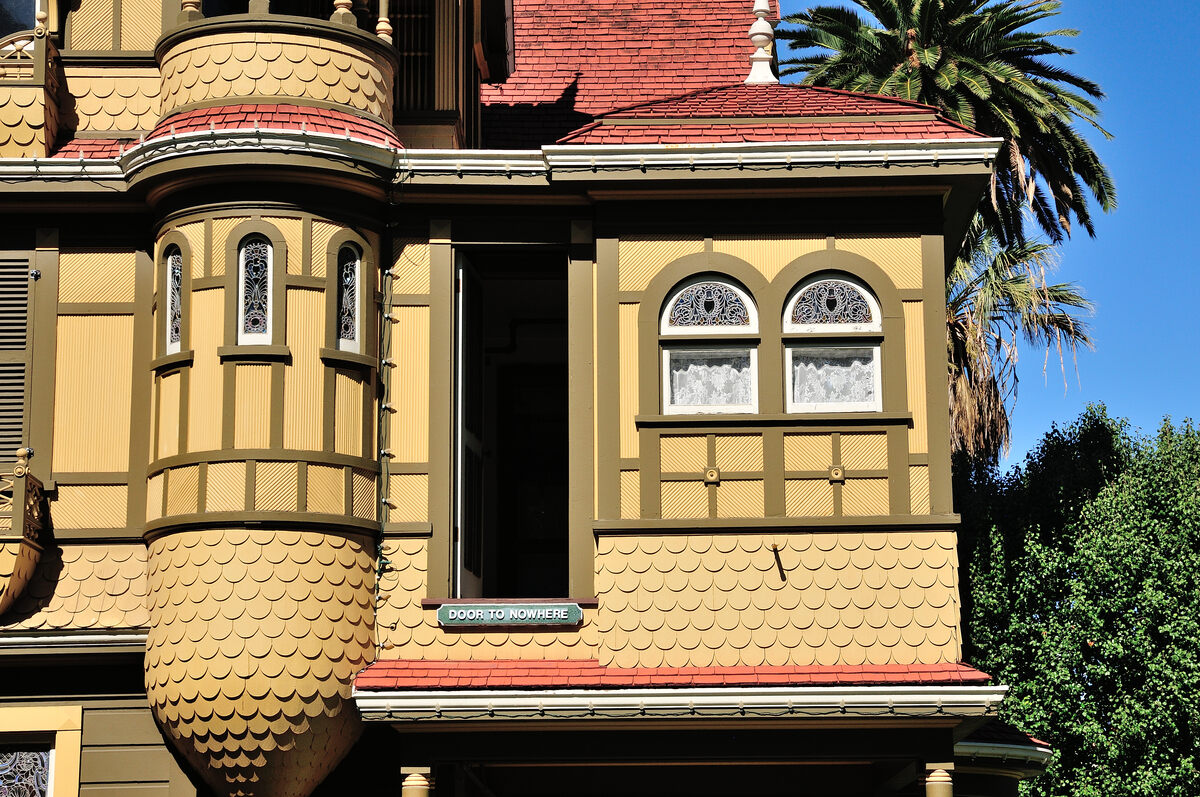 We started by walking through where Sarah Winchester would arrive on a normal day through the entrance where the horse carriage would show up. From there we were taken through a normal sized doorway, although right next to it was a doorway that was only four feet off the ground which Sarah would walk through instead! It was incredibly odd to see, but apparently very convenient for her as the doorknob was closer to the ground and she could access it more easily. The doorway also lead to a stairway with over 200 steps, going through turn after turn, and seemingly lasting enough time that we thought we had gone up as least two floors. We had not. We were only one floor up and the story was shorter than usual! 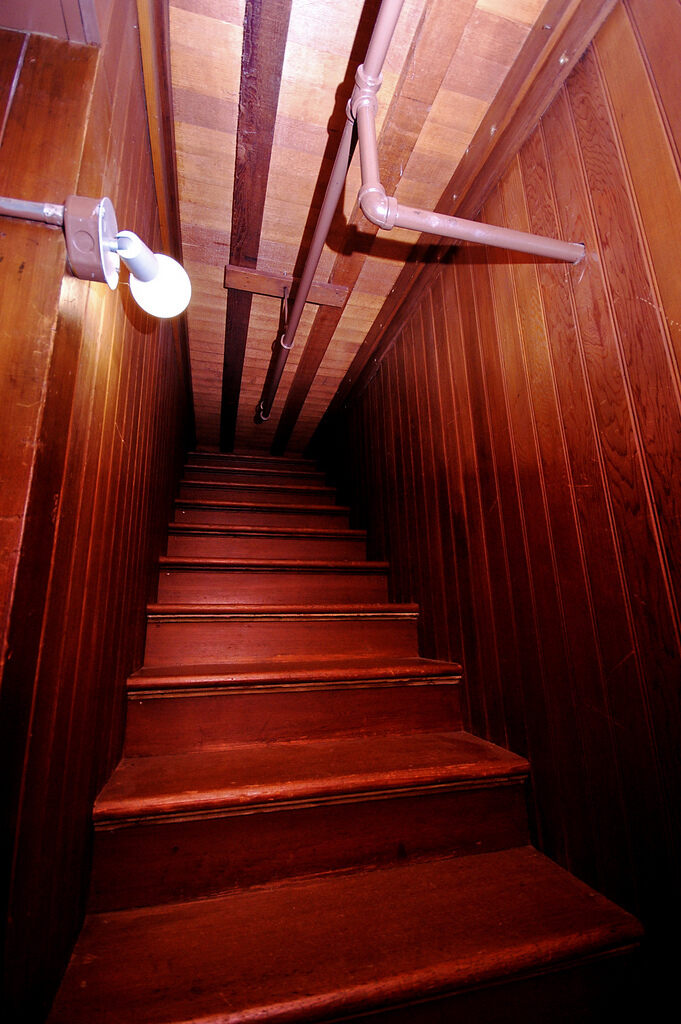 We were then taken to all of the usual attractions. We walked past the “Door to Nowhere”, the stairway to the ceiling, and windows with no view. We even were able to see the place where Sarah could look down into the kitchen and spy on her help, something that she did on occasion to make sure that she was not being watched or talked about, and in a place where they could not tell that she was watching and listening. The most interesting of these attractions however, was the seance room. It wasn’t large and it was only one of many from what we were told, but it definitely had an eerie feel to it. It was small, dark, and had the well worn aura that a lot had happened in that room.

After the seance room we were led to Sarah’s bedroom, which was the first time that we were really exposed to the attention to detail that Sarah had put into every aspect of the house. Her bedroom was gorgeous. Each piece of furniture, each print on the fabric of the bed and rugs, each detail in the wood floors, was meticulously made and showed master craftsmanship. It was definitely eccentric, as was Sarah, but everything had a place and it was all custom fit for Mrs. Winchester. The bed was short with a tall headboard, and even the room itself wasn’t vast, but it was perfect sized for her. It was also the place in which she passed away, which after our guide mentioned this, an odd chill seemed to creep throughout the room and we were ready to move onto the next thing. 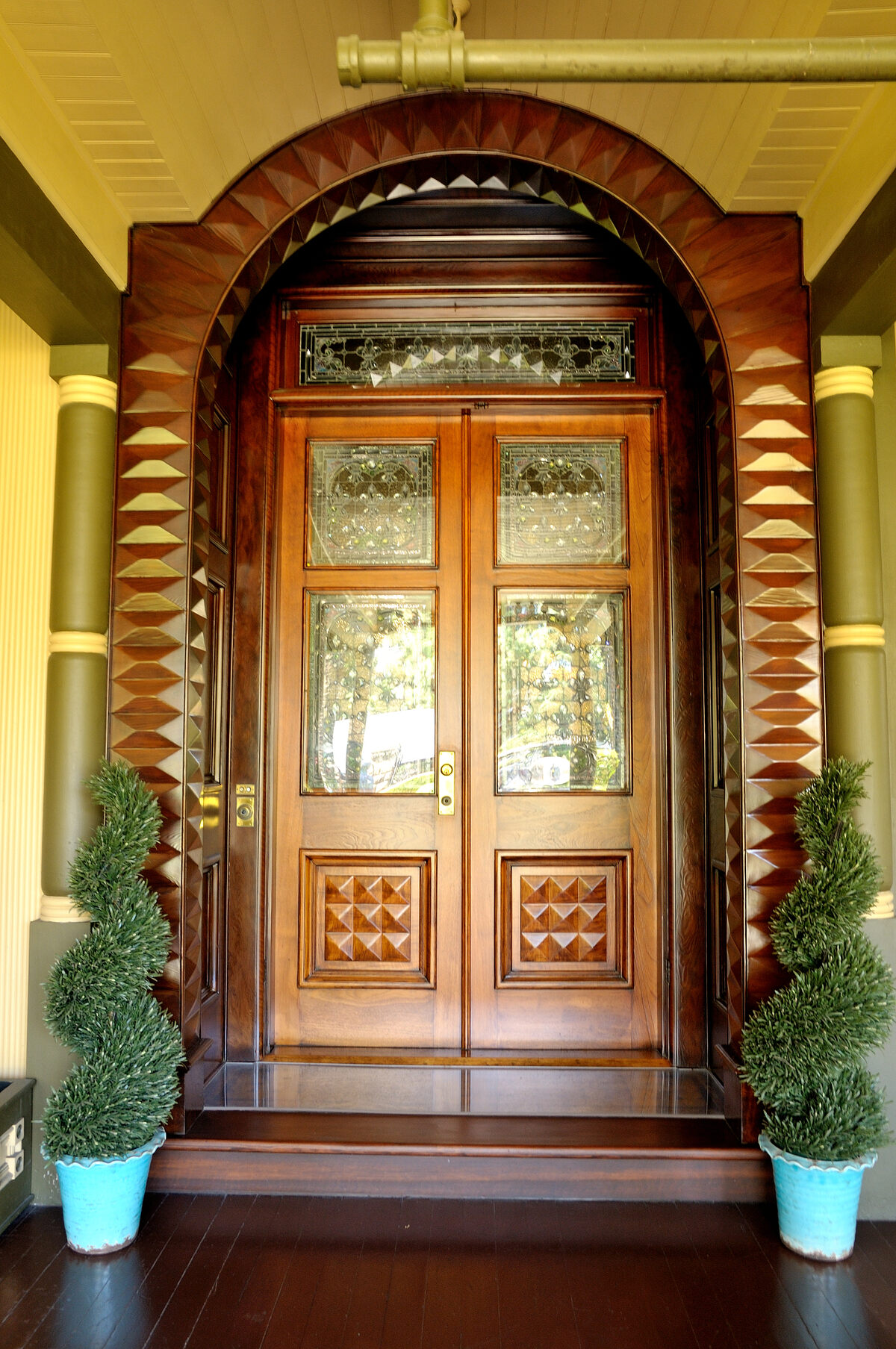 After making our way back down the stairs (normal ones this time) we were taken to the main entrance, another show of the beautiful craftsmanship that was put into the creation of this gigantic building. As we were observing the tiniest attentions to detail, we were told of when Theodore Roosevelt visited the house and one of Sarah’s grounds keepers almost told him to leave because she didn’t want visitors! We made it to the ballroom, another beautiful show of Mrs. Winchester’s eccentric style, where there was more oddities such as some mysterious ballroom windows to nowhere that read “Wide unclasp the table of their thoughts” from Troilus and Cressida (IV:5:60) and “These same thoughts people this little world” from Richard II (V:5:9). 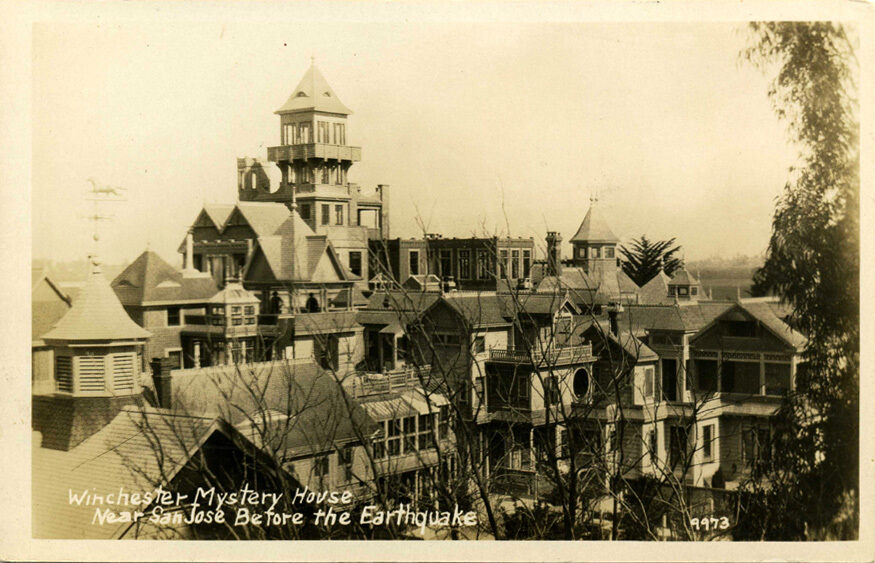 Near the end of the tour, we were given the chance to go into the basement of the mansion. Besides the fact that it was very creepy and the only reason we were able to go into it was because it was recently remodeled, it was mostly just a normal basement filled with coal furnaces and storage. It still reminded me of something out of a horror movie though!

And with that, the tour was over. The house was fantastic, eerie, creepy, and a gorgeous feat architectural engineering. With all of it’s twists and turns, the house itself was remarkable and I hope, especially with the new movies coming out, to someday be able to visit it again. 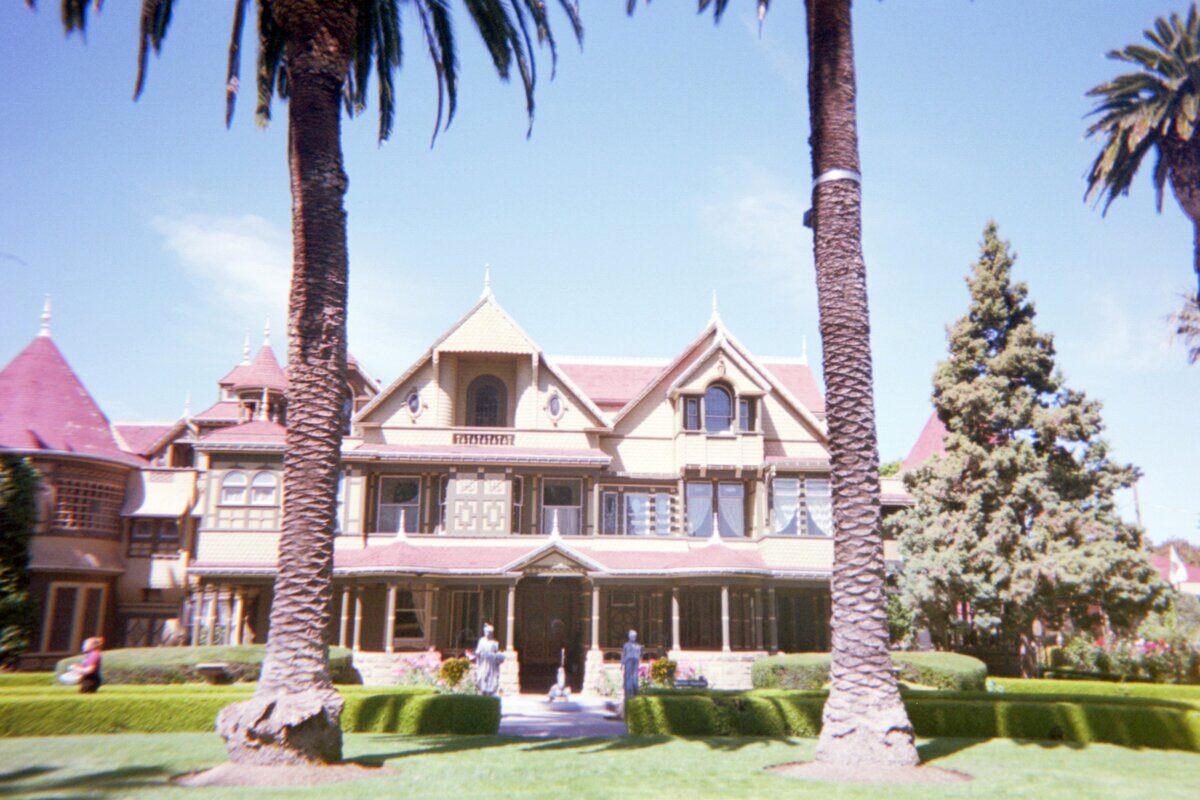