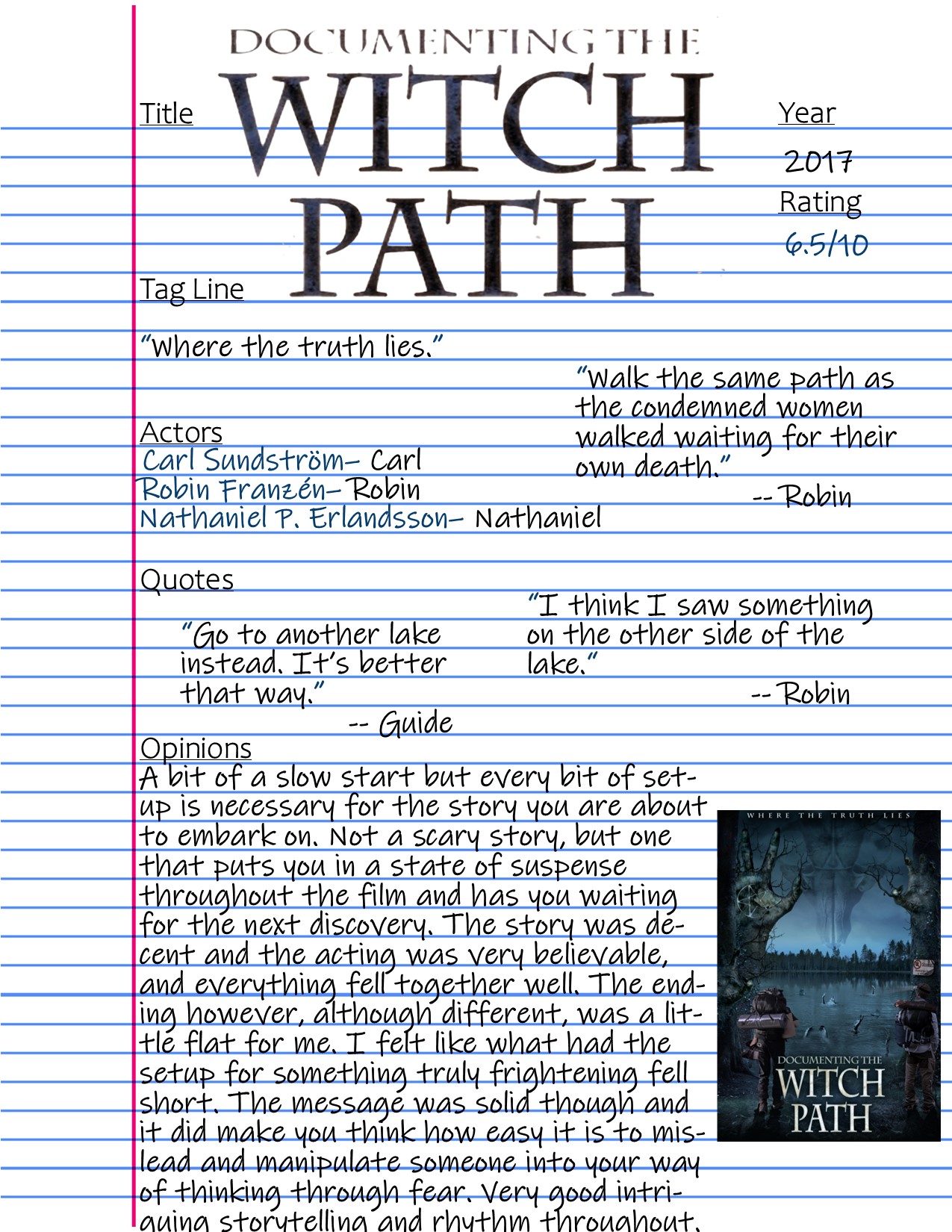 Exploring the Haunted Fortress of Suomenlinna

A few years ago I was lucky enough to travel to Finland for an internship studying marine seagrass ecology through the San Diego State University Research Foundation with Åbo Akademi University! While there, I was able to explore the beauty of the wonderful country and one of the incredible places I was able to see was the Fortress of Suomenlinna in Helsinki. It was an incredible experience to see the ruins of something that old, way older than anything I have seen before! On the day that we boarded the ship across the water, it was cold and raining and simply added more to the experience of the place. 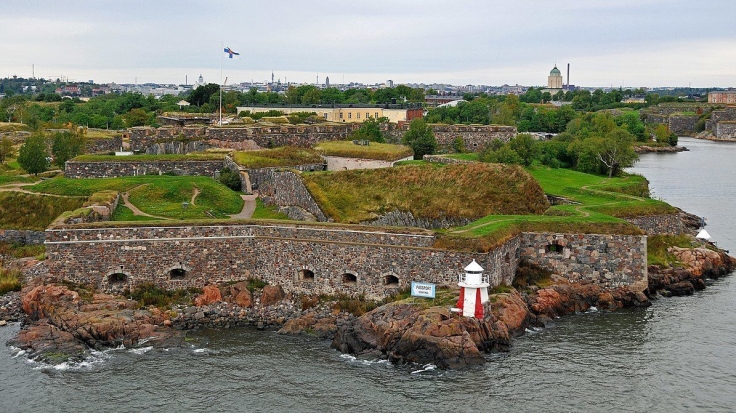 “Suomi” means Finland and “Linna” means castle. It was constructed in 1748 and has defended the Kingdom of Sweden, the Russian Empire and most recently, the Republic of Finland. Also known as Sveaborg, it sits on the Susiluodot islands near the Helsinki harbor, originally built by the Swedish and later falling to the Russians in 1808 who expanded the base, added barracks and an Orthodox church and renamed it Viapori. Finland achieved independence in 1918, taking the fortress and renovating it, naming it Suomenlinna, “The Castle of Finland.” It was used to defend the country during WWII.

Stepping off of the ferry was like stepping into a whole new world, another time and place. Most of the fortress was renovated back to its original form and you could just sense the history coming out of that island. We, my adviser and I, decided to wander on our own and try to take in all that we could. Luckily, almost everything was written in Finnish, Swedish, French, English and Russian, so we could navigate ourselves pretty well without a guide.

We started by circling around the outer perimeter of the grounds, as most of the middle had been transformed to tourist attractions and museums, and the outer walls were still very original. We went up first, following the reinforced edges surrounded by turrets, battlements and some of the coolest underground storage facilities I have ever seen, disguised from the air as mounds of dirt. We weren’t able to go inside as the doors were very unsteady, but what a cool design! 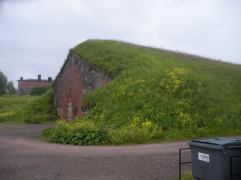 We then moved downward into the tunnels below the walls. Most of them were open to the outside, as you can see from the image above, and were only used for shelter and to remain hidden. However some of them veered off into the ground, some down into the ground, until it either caved in or was blocked off and deemed “condemned.” We still went into most of them. And I have to say that throughout the entire experience, the feeling I felt in the tunnels was the eeriest out of the entire grounds. You could almost sense how many feet had traveled those corridors. How many battle were fought in those tunnels and how many people lost their lives over the centuries that it has been standing The fortress has seen so many souls pass through it, and I definitely got a sense of that down there. 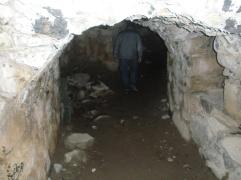 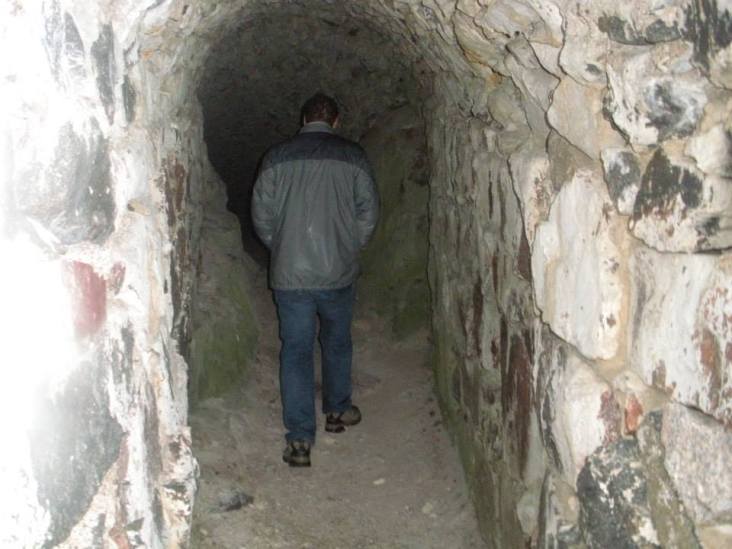 After leaving the tunnels, we started inward to the inner grounds of the fortress. This is where you could tell a lot of renovations occurred, but this is also where we were able to get a better sense of the history of the place. Travelling under decrepit archways and around stone walled buildings, we were able to see just how much these old structures have really stood the test of time. What continued to get me was the fact that everything had a thick layer of dirt and vegetation on it. It gave it all such an old, antique look about it, and really showed it’s age. 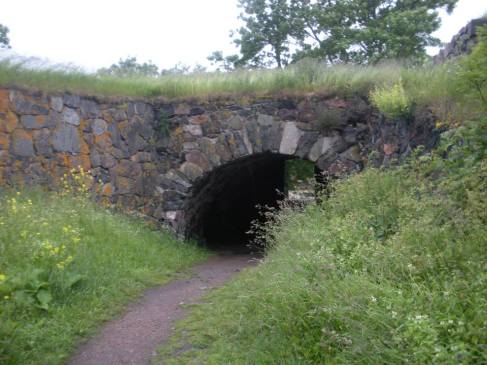 We spent the good part of the day just roaming. Looking at every stone, every mound building, walking through every tunnel and reading every sign that we could understand. Even though it was raining, it didn’t seem to faze us. As I said before, it actually added to the atmosphere of the whole place. The clouds and mist looming overhead just gave everything the authentic look that I only would have expected coming from an island like this. The history of the place still has me in awe and I can’t believe I was lucky enough to be able to travel all the way to Helsinki, Finland and witness the greatness that was the Fortress of Suomenlinna! 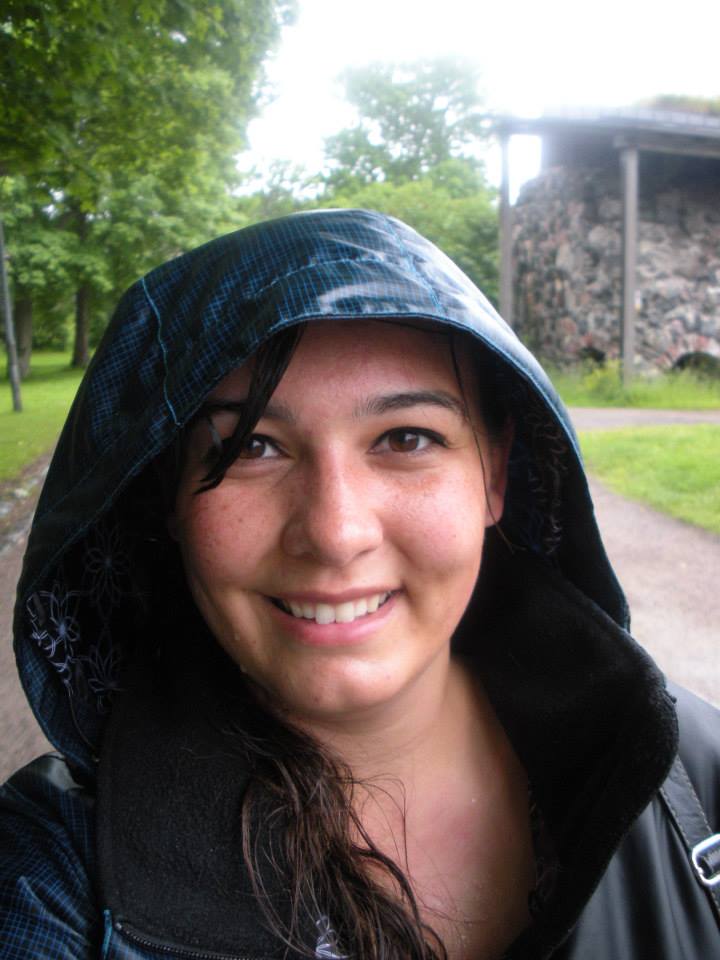 While visiting beautiful San Antonio for a friend’s wedding, I decided to take advantage of the city and visit one of the oldest landmarks in America’s history. While there were a lot of people there, being able to roam the grounds and enter the church itself was quite an experience!

The Battle of the Alamo in 1836 was no doubt one of the most remembered events during the fight for the Texan struggle for independence. During this battle, name’s like Davy Crockett and Colonel James Bowie became enveloped in history for their bravery and sacrifices. But before it was The Alamo, it was known as Mission San Antonio de Valero, and was one of the first five mission built along the San Antonio River to help spread the ideals of Roman Catholicism to the local Native American people in the area. Soon, it was turned into the first hospital in Texas and later outfitted as a fort, where it was dubbed the name “Alamo” meaning “cottonwood.”

The vast grounds of The Alamo housed hundreds of soldiers and  their families. For 32 years, it managed to defend and protect the city from raiding Apaches and Comanches. However after Mexico earned it’s independence from Spain in 1821, the people of San Antonio regained their own hope for victory from the Mexican regime. The Texas Revolution began in 1835 and soon came to the walls of the Alamo. Not a single Texan solder survived.

When we were trying to find it initially, we thought we were in the wrong spot, until we turned a corner and out of nowhere came this small clearing with one the famed building looming in the background. One thing that I wasn’t expecting, but definitely should have been prepared for was the amount of people! The line itself to get into the building was a 45 minute wait, so instead of waiting, we took advantage of the grounds first. Looking to the left of the church was the entrance to some of the grounds that were left over. The original wall still remained, with a few renovations, however most the actual land has been transformed into urban area.

Through the ruined and crumbling remains, we were immediately met with a giant tree. Just growing in the middle of San Antonio! It was and old Live Oak, a tree that in the early part of the twentieth century, was transplanted as an already fully grown tree. It was approximately 40 years old when it was placed in 1912. Today, it measures 12 feet in circumference!

We took the trail around the old tree and at the end of the path we came across and old well and some more crumbling remains. It was so strange seeing all of this history in the middle of a city, but that was soon to change when we finally got in line for The Alamo.

While in line, the path was surrounded by plaques relaying the history of the building and the grounds, as well as pieces of artillery like cannons and other battlements. We also passed a building to the right, that we later discovered was an art exhibit, relaying pieces of San Antonio history along with some museum items. But what got me was how beautiful and green everything was. Even with as hot as it was, there was a strange chill in the air. 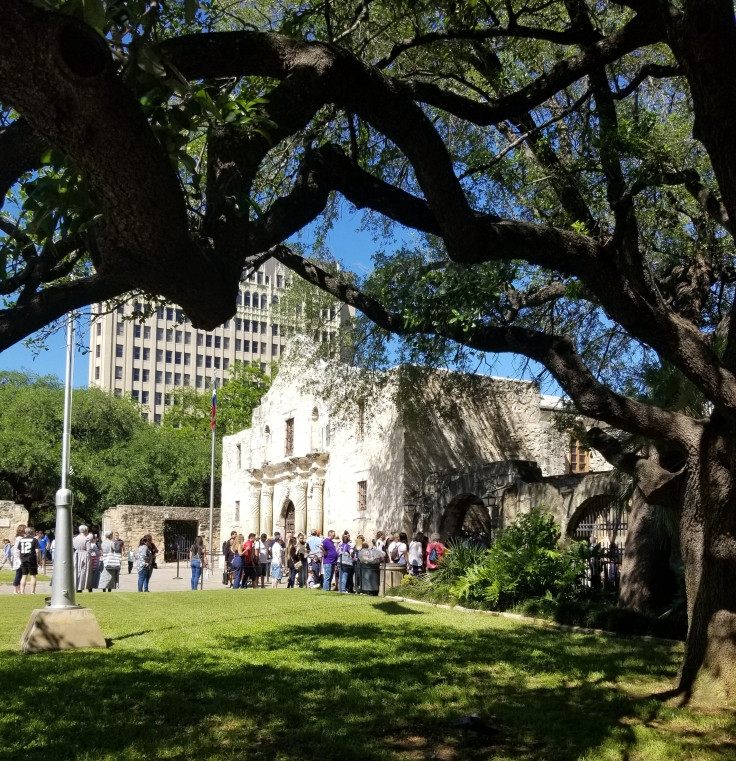 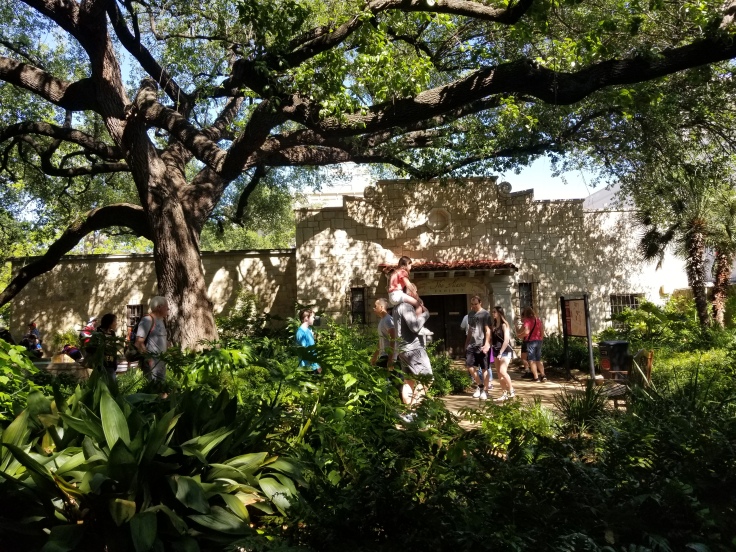 Then we made it to the doors. The old, heavy wooden doors. I’m not going to lie, when I pulled those doors open I got this heavy sense of eerie, unsettling heaviness. Like I was opening the doors into history itself. When we got inside, the air immediately became cold and stale and every sound was hushed to a muffled whisper. After that initial feeling however, everything kind of went back to normal. There was a guest kiosk, flags and plaques with the names of all the people that lost their lives during the battle. You could see musket holes in the walls and in the middle of the floor there was an old stone that was labeled as the burial stone of 5 unknown bodies lying beneath the floor. There were no photos allowed, so I found one online that accurately depicts the inside of the building.

And just like that it was over. We explored every ounce of the room, looking at all the old wood supports, all the names carved into the wall that looked like they were done with old knives who knows how long ago, and read every sign we could find. Once we left, and our eyes adjusted to the daylight, we were done. I realized that once we were outside, that a heaviness seemed to lift off of my shoulders. I didn’t know if it was the atmosphere and the history or something else, but either way, we walked away from the grounds of the building having absorbed every bit that we could of The Alamo.

Later, without realizing, we found out that there was one more stretch of our journey into San Antonio’s haunted history. As we were following the River Walk, we climbed some stairs to the street above and found this giant, magnificent church that we soon found out was the San Fernando Cathedral. Walking up to the front doors, we stopped in our tracks. On the building read that it was the final resting place of Davy Crockett. We walked through the doors and sure enough, there it was. And it was fascinating. 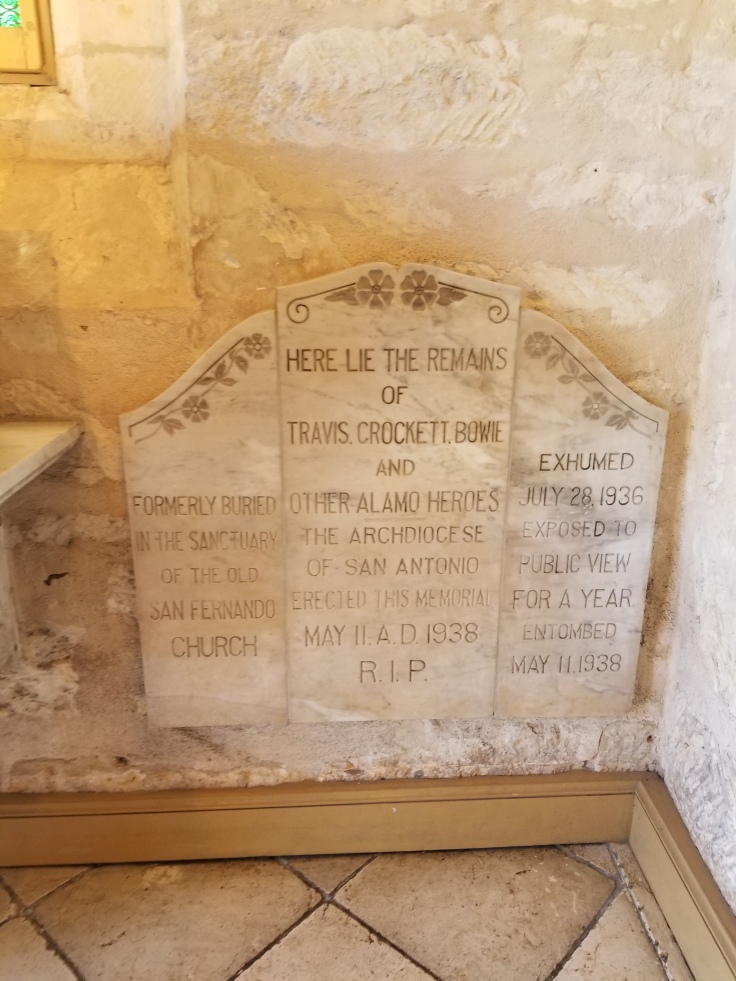 And with that, our Alamo experience was over, and it was very rewarding. Through the building and the grounds and ending with the surprise visit to Davy Crockett, I am so glad that I was able to experience it! Definitely something that I will always remember. Even if there were no ghost scares, the heaviness of the history and the deaths that happened in that place made me certain that the spirits were there, even if they were silent. 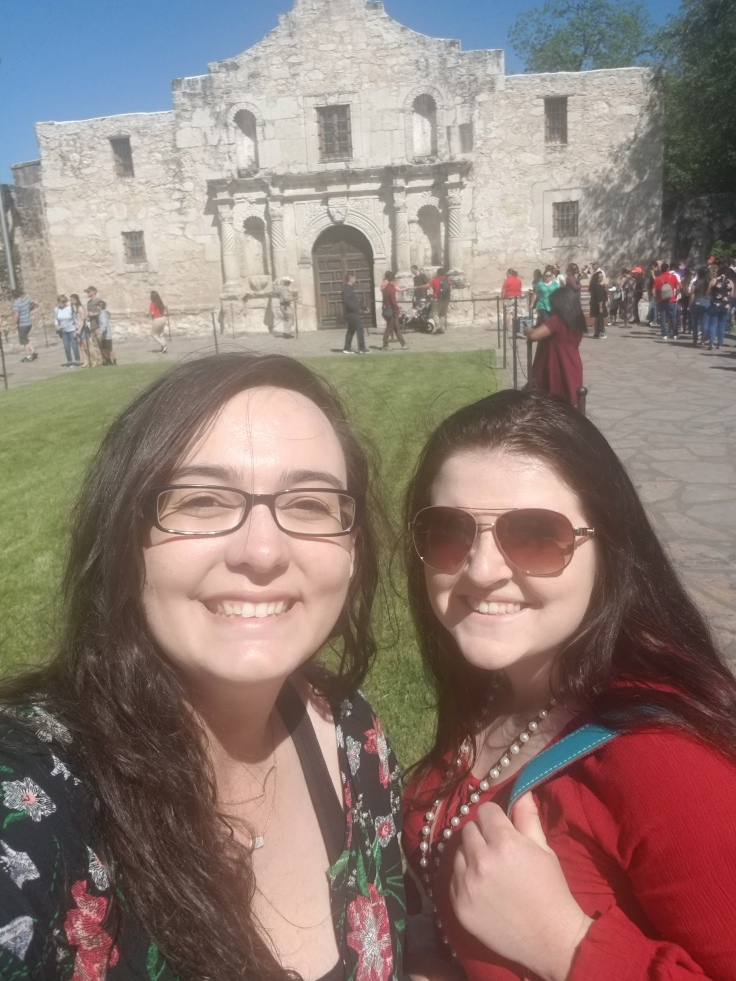